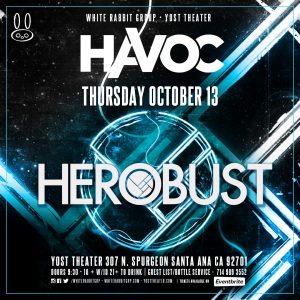 Herobust – Hayden Kramer, better known as Herobust, is a Bass Music Producer from Atlanta, GA. Most notable releases include “Skurt Reynolds” via Mad Decent, “Sheknowshebad” via SMOG, and “Pump This (with Snails)” via Owsla. “I’m Aloud” is Herobust’s latest EP, released via Mad Decent. His new releases will be inspired by Hip – Hop, with plans to include some of the hottest names in Rap music. Hero is touring throughout the US this summer with appearances at EDC NY, Hard Summer Festival, and Imagine Festival to name a few. And recently, Herobust has been commissioned by the likes of Kill The Noise, Barely Alive, and NGHTMRE for official remixes. With time, he garnered the support of Diplo, Skrillex, Bassnectar, Flosstradamus, Destructo and others. This success sent Herobust overseas and on to play showcases for Mad Decent and Buygore during Miami Music Week 2016. Herobust has been featured on BPM Sirius XM, Billboard, Rolling Stone, MTV and many others. YourEDM includes Herobust in their “Top 5 Best Trap Artists 2016” and Insomniac credits him as “one of the hottest voices in the trap-dance movement”. With accolades such as this, he vows not to disappoint with his future releases. If this much is clear, 2016 proves to be a definitive year for Herobust.