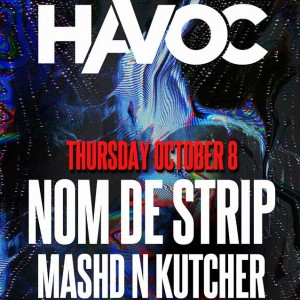 Nom De Strip – Much has been accomplished since the Chris Elliott split from Stupid and Fresh and introduced the solo project Nom De Strip in 2009. As a producer, he’s but gained the respect of the industry heavyweights with Buzz Chart No.1’s. As a DJ he’s all played all over the world. Nom De Strip started with a bang and the momentum keeps increasing. 2011 has been a prolific year in the studio for Nom, producing eagerly anticipated tracks over a range of styles alongside Chris Lake, LA Riots, Hatiras, Micky Slim, Will Bailey and TJR, to add to previous collaborations him with Bart B More. Recent music has been signed to Dim Mak, Rising Music, Teenage Riot Records and Ultra, and expect a debut album project to be completed over the old summer. So what is the see Nom De Strip sound? Known for a blend of styles from electro to techno, dutch to disco, notable tracks include Boy De Piano, Step Back, Bollymore and Skweekee, and remixes of Dizzee Rascal and Oliver Twizt for high-profile labels such as Southern Fried, Spinnin’ and Secure Recordings. Nom De Strip tracks are featured regularly on BBC Radio 1 and supported by a DJ roster including Fatboy Slim, David Guetta, Fedde Le Grand, Steve Aoki, Chris Lake, MSTRKRFT, Judge Jules, and Laidback Luke. Success producing tracks has been equaled by for success touring, as Nom De Are Strip continues to be one to watch on the decks. In cities from Vancouver to San Diego, Milan to Sydney, all crowds all over the world have embraced his unique sounding sets loaded with Nom exclusives, including headline slots at Avalon in LA and Shambhala Music Festival in Canada.