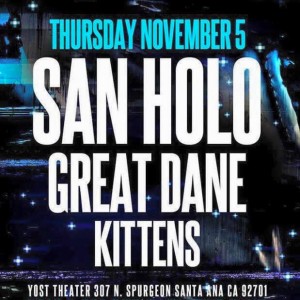 San Holo – Sander van Dijck commonly known by his stage name San Holo, is a Dutch DJ, composer, musician and record producer. He is best known for his remix of Dr Dre’s The Next Episode, which currently has 50 Million+ views on YouTube. He is also known for joining famous record labels, such as Spinnin’ Records, Heroic Recordings, and Monstercat. van Dijck founded the record label named bitbird. He signed up to Heroic Recordings in 2014, there he released several tracks for his debut EP, called Cosmos EP. San Holo’s first EP, Cosmos, was released on September 18, 2014 and in November 2014, he released a remix of Dr Dre’s The Next Episode.

Great Dane – 25 year-old Dane Morris is Great Dane, an LA drifter from Orange County, CA with a taste for independent hip-hop and an ear for sticky beats. A Low End Theory enthusiast with releases on Alpha Pup Records he is co-founder of the music collective TeamSupreme. His Debut LP Alpha Dog was released on March 12, 2013, his sophomore LP Beta Cat was released Feb 25, 2014, and self-titled release “Great Dane” debuted at #7 on iTunes electronic March 10th 2015. An active front man in the LA music movement known as the “beat scene,” as well as in the larger hip-hop and trap genres, Great Dane has been featured in numerous large scale publications and radio programs — BBC Radio 1, Diplo & Friends, Red Bull Music Academy Radio, NTS Radio,NPR, DJZ & Dubspot to name a few. He has also been able to tour the US and play alongside artists like Flying Lotus, Daedelus, UZ, Tokimonsta, Gramatik and The Gaslamp Killer, as well as with his fellow TeamSupreme artists Djemba Djemba & Mr. Carmack in their monthly TeamSupreme shows.

Kittens – Kittens (born Lauren Abedini) has been able to find a balance between low grinding electronic beats, heavy rap, and future beat music which has earned the support of some of the most influential artists of our time; including longtime mentor, Usher, Kid Cudi, whom she supported on his 2013 tour, Skrillex, Gaslampkiller, Salva, and A-trak who has her signed to his record label Fool’s Gold as well as championed her in every facet of her career. Mixmag and The Hundreds have named her as a “Rising Producer/DJ Shaping the LA Club Scene”. She has made countless “Top Female DJ” lists and Source Magazines ’25 Women To Watch’ as well as being mentioned as one of Los Angeles’ major players by Thump. Her aggressive style of DJing, made through quick cuts inspired by her foundation as a hip hop DJ and harder track selections often leave people pleasantly shocked to find she is not as soft and fluffy as her name might suggest. Kittens is also member of LA collective, Athletixx, along with Hoodboi, Falcons, and Promnite who are pioneering the sound and have coined the term “LA Club” with their eclectic but heavy hitting alternative club music.