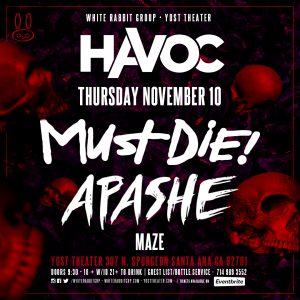 Must Die! – The creative mind of US electronic producer MUST DIE! is one that consistently amazes his fans worldwide. Since he began to gather attention across the bass scene in 2011, he has produced a wealth of original material and remixes, releasing on labels such as Never Say Die, Ultra, Dim Mak, Play Me, Mad Decent and Atlantic Records. Using his naturally artistic and innovative musical intuition, MUST DIE! has quickly risen to recognition with his distinguished level of production. He tours extensively, and has supported the likes of Datsik, Excision and Zomboy to name a few. With a charismatic and outgoing personality alongside his technical proficiency, MUST DIE! will continue to grab attention over the coming months.
[soundcloud url=”https://api.soundcloud.com/users/7871599″ params=”auto_play=false&hide_related=false&show_comments=true&show_user=true&show_reposts=false&visual=true” width=”100%” height=”450″ iframe=”true” /]

Apashe – The Legend…Witnessing the destruction his family had caused as the first to be infected, Apashe confronted them. There was no escaping their wrath, and so, amidst the madness in the household, Apashe reached for his grandfather’s tomahawk. As he ferociously swung the ancient weapon at the savages, Apashe knew the flesh he cut into repeatedly was that of his own blood; his own family. Fighting for his life, Apashe’s mind spun and anger rushed through his shaking body. In a final spit of rage and lunacy Apashe managed to behead the last attacker; his father. Horrified and drenched in sinew he stood among the mangled remains, blood flooding at his feet. He had managed to escape their blood-thirsty urges. As he reached for the front door, he glanced back one last time at his dismembered family. His father lay closest, and reaching down and taking a two-feather necklace from his father’s headless body, he made a promise to avenge whoever was responsible…
[soundcloud url=”https://api.soundcloud.com/users/765484″ params=”auto_play=false&hide_related=false&show_comments=true&show_user=true&show_reposts=false&visual=true” width=”100%” height=”450″ iframe=”true” /]