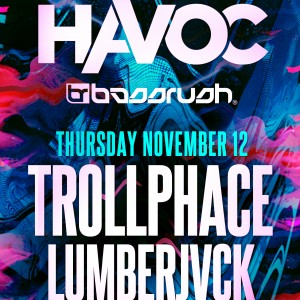 Trollphace – TrollPhace, aka Damon Orienti, has quickly established himself as one of the filthiest and most violent producers in the game. Too complex to be qualified simply as Dubstep, his evil and aggressive sound makes run-of-the-mill bass music appear mild-mannered at worst. Proving to be a momentous year, in 2014 the Atlanta-based producer has already enjoyed: a Reddit shoutout from Skrillex, who instructed fans to, “Check out this kid…making SICK tunes”, a Main Stage appearance at Ultra Music Festival alongside Diplo and Skrillex as Jack U and an OWSLA release. Not to mention the attention TrollPhace has received from some of the industry’s heaviest hitters including 12th Planet, Zed’s Dead and Datsik. More than a filthy producer, TrollPhace is a monster behind the decks. His ground-shaking sets seem to beg the question, how violent can we get? Blending together his unique hip-hop influenced and aggressive tracks, TrollPhace leaves crowds begging for more.  With a nationwide tour alongside Mantis and Rekoil getting underway and a number of raw and heavy unheard tracks in his arsenal, TrollPhace will without a doubt continue to prove the substance behind his monstrous reputation.

Lumberjvck – Connor Schatzel, aka LUMBERJVCK is from Arcadia, CA. He is a musical perfectionist, having mastered the guitar, piano, and drums at a young age.  To hone his skills as a producer, Connor attended the Icon Collective Music Production School in Burbank, CA. As his music career continued to progress, he won the EDC Chicago Discovery Project in 2013 as well as making a cameo appearance in Borgore’s UZA music video.  LUMBERJVCK started making a name for himself through his free but extremely filthy trap & dubstep releases on EDM.com.  Those releases built his fan base and eventually started the JVCKSQUAD, LUMBERJVCK’s core fans.  One of his most successful tunes to date, “Click Clvck,” made its way around the world with Skrillex on his 2014 mothership tour giving him the exposure that he has dreamed of.  2014 was an outstanding year for this rapidly emerging producer highlighted by his EP release JVCKWOOD on Rottun Recordings.  JVCKWOOD went to #3 on Beatport’s Hip-Hop/Trap charts as well a #5 on the Dubstep charts.  LUMBERJVCK quickly followed with new releases on Figure’s Doom Music Records and Kannibalen Records.  If early 2015 is any indication this will be a huge year for this 21 year old producer.  You can expect to see more than one EP from him this year on some of the most respected trap & dubstep labels.