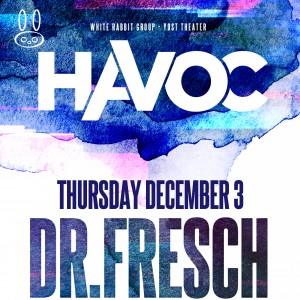 Dr.Fresch – In 2012, Tony launched the Dr. Fresch brand with remixes on Dim Mak Records, Big Mamas House Records, and Prep School Recordings. After securing a position as a resident DJ for Steve Aoki’s Dim Mak Records in 2013, he won Insomniac’s Discovery Project Contest and was chosen to perform at Nocturnal Wonderland in San Bernardino, CA. Following his performance at Nocturnal Wonderland, Dr. Fresch went on to release his debut EP on Prep School Recordings, and was featured at #9 on Billboard Magazine’s “Next Big Sound” Chart in November 2013. Since then, Dr. Fresch has gone on to release a massively successful series of remixes, garnering multiple Top 5 spots in Hype Machine’s popular chart, amassing 6,000,000 plays on SoundCloud, and millions more on YouTube. Dr. Fresch has continued to gain serious momentum over the course of the last year, playing some of the most notable venues in America, including The Avalon, Club Nokia, Exchange LA , Dim Mak Studios, Audio SF, and Spy Bar. In Summer 2014, he performed at EDC Las Vegas and on the main stage at Red Rocks Amphitheatre for Global Dance Festival. The future continues to remain bright for Dr. Fresch, as he prepares for a nationwide touring this spring and the release of his new original EP.

Coyote Kisses – Forward thinking electronic outfit Coyote Kisses was bread in the swampy wetlands of central Florida, the musical brainchild of high school friends Joe Sussingham and Bryce Bresnan. The two discovered a keen creative synergy playing in various rock bands together before founding a live electronic band under the name Coyote Kisses, quickly gaining a local following due to their inherent musicianship and theatrical live performances. Today, they aim to go global, and continue to push their production into uncharted territories. Interweaving sparkling melodies with stylish fanfare, it is not difficult to see why CK has captured the hearts of so many listeners. If the innovative nature of Coyote Kisses has taught us anything thus far, it is to always expect the unexpected. After repositioning their sound, Coyote Kisses started 2015 with a series of viral originals. With multiple HypeM chart topping singles and support from the most respected dance music publications, there is no doubt that Coyote Kisses has a bright future ahead.