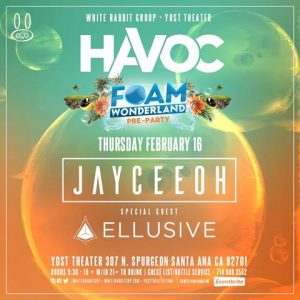 Jayceeoh – Jayceeoh, industry heavyweight, producer and world-renowned turntablist, has become one of the most revered and respected DJs in the United States today. Since Jayceeoh’s years competing in the DMC world championships, to bringing home the title of “Master of the Mix” on VH1 in 2013, this Los Angeles based producer and “real DJ” has been relentless in his path to the top of the pyramid. In 2014, Jayceeoh hit the ground running by gathering early support from the likes of A-Trak, Bassnectar, Borgore, Flosstradmus and The Bloody Beetroots, to name just a few. His trap and bass-driven tunes have also captured the attention of some of the largest online platforms, including Billboard, Rolling Stone, VICE Magazine, DJ Mag, This Song Is Sick, Dancing Astronaut, and THUMP, amongst others. Releasing music on Atlantic Records, Dim Mak, Fool’s Gold, Ultra Records, Buygore , and other heavy hitters, Jayceeoh continues to push the envelope forward with no signs of slowing down. To date, he has played some of the biggest venues and festivals around the world, including Coachella, Firefly Festival, iHeartRadio, TomorrowWorld, Lights All Night, Das Energi, Empire Music Festival, and many more. Outside of the festivals and his busy headlining tour schedule, Jayceeoh has also toured with Morgan Page, The Bloody Beetroots, 2 Chainz, Pusha T, and Sammy Adams. In addition, he also inked a 2016 residency deal to headline The Light Nightclub in Las Vegas monthly. After making a huge splash at both SXSW and WMC in 2014, Jayceeoh went full steam ahead with over 25 remixes and/or originals released in just a 2-year span. Today, when not on the road touring and playing shows in Las Vegas, Punta Cana, Cancun, Miami, San Francisco, Chicago, Los Angeles, or the countless other cities in his path, he is in the studio working on music with some of the biggest names in the business. You can expect upcoming collaborations with the likes of Zeds Dead, Redman, Brillz, Morgan Page, Bassnectar, The Bloody Beetroots, Meaux Green, Bare, JayKode, and others.

Ellusive – From across the world, Ellusive has still yet to reveal it’s true identity or whom / what it is but we sure know that whoever they are the group is achieving some incredible accomplishments. With a unique style across many different electronic genres the group have achieved multiple records reaching millions of people & has took the world by storm since day one. It was just last summer when we were first hearing of Ellusive from his collaboration with Arman Cekin which has now reached over 5 million plays. Since then Ellusive has grown to over 100,000 followers with records appearing on BBC Radio 1 & support from popular DJ’s like The Chainsmokers, Porter Robinson & Laidback Luke.