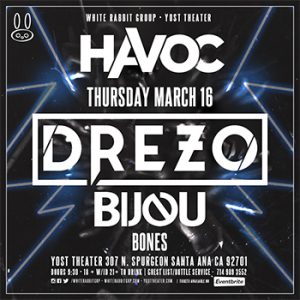 Drezo – It is rare now in a music scene of tiring trends for an artist to break the mold and make a statement creatively that people can connect to. However, based in Los Angeles, Drezo challenges the mainstream standard by staying true to his own powerful underground sound of house music. Through his compositions and remixes, the 24 year old aims to represent the darker and more imaginative side of EDM. With releases on OWSLA & Mad Decent, Drezo has proven that his haunting surge of originality is being accepted by the masses. Constantly devoting time in the studio has helped him evolve and innovate towards a sound that is now being widely recognized by the likes of Diplo, Destructo, Porter Robinson, Tchami, Zedd, DJ Snake, Dillon Francis and more, solidifying Drezo’s placement among the world’s top tier dance producers.

Bijou – Hailing from Phoenix, Arizona, Bijou has taken his native scene by storm. Spinning hundreds of local shows a year atthe most populated venues in the city, it was only a matter of time before Ben Dorman saw the light outside of Arizona. Playing across the country in cities like Las Vegas, New York, Seattle, and San Diego, Bijou’s street cred grows even more reputable by the day. With releases on Night Bass, Fool’s Gold, and Prep School Recordings, as well as a hit collaboration with Dr. Fresch,“Hello,” which has received support from AC Slater, Destructo, Don Diablo, Drezo, Malaa, Party Favor, and Wax Motif,Bijou has a cacophony of support To prove his worth. Infusing elements of hip-hop with those of classic house, Dorman is poised to join the ranks of the G-House supreme. The vibes are sexy, the bass is dark, and the dancefloors are primed for the sounds of Bijou..

Bones – For almost a decade, Trevor Moffitt aka BONES has helped strengthen the electronic music scene in Los Angeles while spreading his sound to cities far and wide. Sharing the stage with the biggest names worldwide, BONES has developed an infectious fusion of house, future, garage, deep, and techno. In part to founding one of the most influential electronic music outlets in the world, Gotta Dance Dirty™, he also helps manage the event/label NIGHT BASS with AC Slater, and was named head of A&R in the U.S. for Sweat It Out! Records alongside Sinden and Yolanda Be Cool.