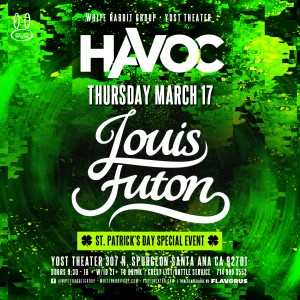 Louis Futon – Hailing from Philadelphia, 23 year old Tyler Minford AKA Louis Futon has risen to prominence over the course of only two years. Heavily influenced by Hip-Hop, Louis Futon is the only producer ever to create official remixes for Logic, Mos Def, G-Eazy, Future, Wiz Khalifa, and more. Regardless of his influences, Louis rebelliously declares, “Genres don’t define me.” From creating Trap and Future Bass rooted originals to changing the very DNA of some of Hip-Hop’s biggest hits, Louis is able to defy boundaries. Typically consisting of bright melodies and rhythmic electro-tones carried by Hip-Hop drums, Louis Futon has keenly carved out a genre that ironically adheres to none.