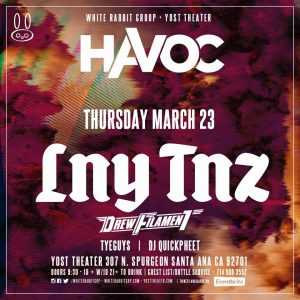 Lny Tnz – They ‘don’t give a f*ck about tomorrow’ or the boundaries of the EDM genre. Teaming up in their hometown, Vlaardingen, in 2004, Mitchell Vreeswijk and Jan Stadhouders formed LNY TNZ with the shared passion of putting a new twist on hard hitting EDM. The group rapidly made a name for themselves, as they released underground tracks that evolved the genre into something entirely in and of its own. They quickly became pioneers in Dutch music as a DJ tandem, known for their unique sound. Support from other leading artists came pouring in as LNY TNZ tracks appeared on numerous compilation CDs and received radio play worldwide. After mixing their second official compilation CD in 2007, LNY TNZ toured at major festivals and events around the globe, emerging as a leader in the scene. Following a string of tours, Mitchell and Jan took a break to study, travel, and work on other art forms, including film directing. In 2012, they came up with a new round of music. LNY TNZ recorded several underground bootlegs and released them online to the support of their fans and major artists, who welcomed the duo back from hiatus. In 2013, LNY TNZ presented their single ‘Last Night Ever’ with Yellow Claw from the forthcoming collaboration EP ‘All Your Bass.’ The hit was released by Sony BMG and Dim Mak, along with a popular video that takes place over a full tilt night in Tokyo. LNY TNZ are now here to stay, currently working on more major collaborations and putting out new music that will continue to push and the boundaries of their unique combination of hardstyle, trap, and EDM.