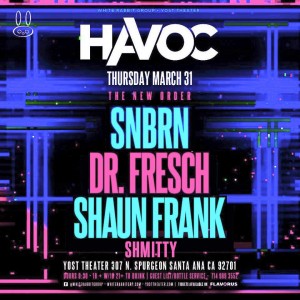 SNBRN – Kevin Chapman’s introduction to dance music was at age 12 when he stumbled upon music from the likes of Fatboy Slim and Moby. In 2008 he got his first copy of the digital production software, Reason, and started producing his own dance music. Slowly but surely, he began to immerse himself in the LA and San Diego club scenes. By 2013, Kevin had completed multiple professional degrees in audio engineering and production. Shortly thereafter the vision for the SNBRN brand emerged and Kevin embarked on a new creative path. Recognizing the increasing popularity of deep house, indie dance, and nu disco Kevin envisioned a brand that combined all the best elements of each sub-genre while remaining instantly accessible. In May of 2014 Kevin launched the SNBRN brand with a series of viral covers and remixes. He was quickly met with a series of career milestones including: multiple HypeMachine chart topping releases, garnering millions of plays on SoundCloud and YouTube, and direct support from Pete Tong on BBC Radio 1. With official releases on Atlantic Records, Astralwerks, and Sony UK, Kevin has rapidly solidified the SNBRN brand as an overnight sensation in the indie dance and house music worlds. The first SNBRN single ‘Raindrops feat. Kerli’ was released January 20th on Ultra Records.

Dr.Fresch – In 2012, Tony launched the Dr. Fresch brand with remixes on Dim Mak Records, Big Mamas House Records, and Prep School Recordings. After securing a position as a resident DJ for Steve Aoki’s Dim Mak Records in 2013, he won Insomniac’s Discovery Project Contest and was chosen to perform at Nocturnal Wonderland in San Bernardino, CA. Following his performance at Nocturnal Wonderland, Dr. Fresch went on to release his debut EP which was featured at #9 on Billboard Magazine’s “Next Big Sound” Chart in November 2013. Since then, Dr. Fresch has gone on to release a massively successful series of remixes, garnering multiple Top 5 spots in Hype Machine’s popular chart, and over 10,000,000 plays on SoundCloud and millions of plays on YouTube. Dr. Fresch has continued to gain serious momentum over the course of the last year.  With releases on OWSLA, Ministry of Sound, and more, Dr. Fresch has quickly solidifed himself as one of the most unique emerging dance music aritsts. Over the summer of 2015, Dr. Fresch launched his viral mix series “The Prescription” which has already garnered millions of plays over the course of its first 8 episodes.  Each installment features a 30 minute Dr. Fresch mix followed by a 30 minute guest mix.  The summer also brought Dr. Fresch onto the festival circuit with plays at likes of EDC Las Vegas, Paradiso, Moonrise, Nocturnal, CRSSD, Splash House, Escape, and more. With an arsenal of original music yet to be released, the future continues to remain bright for Dr. Fresch

Shmitty –  The Los Angeles-based, Netherlands-born producer/DJ combines funktion and form with style, taste, and class; he mans the decks like a sniper at the watchtower, with house and techno as his artillery. A chameleon onstage, shifting from groovy down-tempo to cultish techno, he covers the full spectrum of true house music. With a deep knowledge of the history of electronic music and with a direct mainline source to the current music landscape, Shmitty melds past and present in all his meticulous sets, which have allowed him to share the stage with a diverse roster of dance music titans, including A-Trak, Claude VonStroke, Dash Berlin, Cosmic Gate and countless others. The stage is his first home, having performed at some of the top venues and music festivals across the US, including Escape from Wonderland and the Hollywood Palladium, as well as Los Angeles nightclubs Create and Exchange LA, where he holds a double residency. On the stage and in the studio, Shmitty dominates his craft. You’ll hear it in his sets. You’ll feel it in his music. And when you do, you’ll be in for a ride.