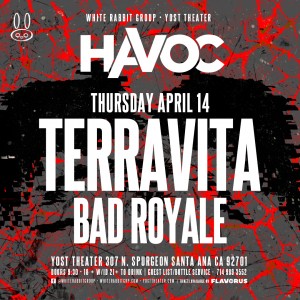 Terravita – Dominating the bass music scene for nearly a decade, Terravita has run the gamut when it comes to crowd-smashing, mind-melting electronic music. From the days of Drum & Bass to the era of contemporary Dubstep, Trap and everything in-between, Terravita know no limits when it comes to crafting the most staggering, bone-jarring bangers around. From their industry-leading sound-design to the razor-honed precision of their drums, Terravita are undeniable experts at their craft, and will inevitably remain so for many years to come.

Bad Royale – Bad Royale is a Southern California based DJ and producer group who, in the last year, have pushed and broken the boundaries of dubstep, bass, moombahton, and have gone as far as serving up their own genre known as “kingstep.” Bad Royale are known by those close to them as some of the hardest working producers in the industry, constantly trying to break molds and experimenting with new sounds to push their “kingstep” to new heights. If they are not playing a set, they are guaranteed to be found in the studio from morning to dusk. Collectively, they’ve secretly been everywhere over the past decade, releasing music on every EDM label you can think of. Between Anjunabeats, Toolroom, Spinnin’, Buygore, Firepower, Sweetshop, Ride, Enhanced, Zero3, SPRS, Atlantic, and Ultra, Bad Royale has an incredibly diverse background of production, and it shows in everything they release. Outside of their sound lab Bad Royale drop the serious faces and proceed to obliterate dancefloors with their heavy bass and genre-destroying sets, keeping their live shows in a storm of incredible energy. When it comes to dancing, Bad Royale knows how to light the fire in all of us, orchestrating the crowd from the stage in their own cloud of zeal, and they do it all via their signature sets, strictly utilizing their own studio endeavors. You wont hear of any one name that is poised better than Bad Royale to take over in 2015. This band of perfectly meshed misfits are heavy hitters and are not planning on holding back. If you were to ask them about the future of EDM, they would likely greet your question with “Welcome to Bad Royale.