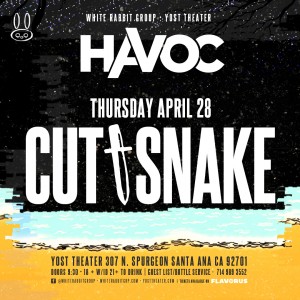 Cut Snake – Zero f*cks given – some would argue that’s the mantra when it comes to the Cut Snake way of life. “It’s about enjoying the moment and having a great time,” Paul “Fish” Fisher explains of his group with Leigh “Sedz” Sedley. However, it’s worth noting that there are, in fact, a few fucks the guys do give when it comes to their music. Which they have no problem showing.In the studio, Sedz and Fish channel their unabashed, fuck-all attitudes into tracks like their sultry debut single “Face Down”, and the lush vocal cut “Echo”. The guys coin an atmospheric and deep-leaning sound that’s suited to no one particular environment. As Fish tells it, “you should be able to enjoy it everywhere.” Mates since childhood, Cut Snake grew up on the Gold Coast of Australia; surfing professionally and competing against each other from the time they were 12. In this time, they developed the hilarious banter and incredible dynamic that is still prevalent in interviews and on stage. The guys got into dance music while they were touring the world for surf contests and quickly grew passionate about the underground scenes from each country they visited. With plenty of time waiting for waves, they fine-tuned their production skills from beachfront bungalows, giving their music a fresh feel and their live show a vibe like no other. Outside of their wildly successful surf careers, Sedz channeled his passion and focus for the sport into his music production, and for that he’s known as the “mad scientist” of the duo. Fish is known for his web series, Followthefish.tv. His wild personality and contagious laugh have made him one of the biggest personalities in the surfing industry to date. Now that Cut Snake has relocated stateside and inked a deal with Three Six Zero / Warner Bros. Records, the guys flout the seriousness of the scene in every way possible. Their crazy video antics have amassed a cult following in their home country of Australia and given the guys an edge on US turf. The edge, of course, is in teaching their American audience how to take a break from their day jobs and have a fucking beer…or seven.