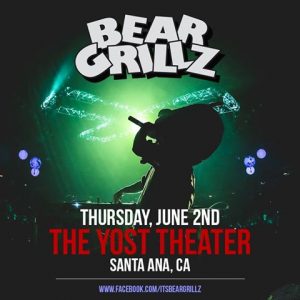 Bear Grillz – Proving that opposable thumbs or a basic grasp of the human language are not necessary prerequisites for EDM domination, allow us to introduce to you Bear Grillz. He’s certainly not your standard 28 year-old grizzly bear. Hailing from Yosemite national park, Grillz’s story begins on a typical afternoon spent growling at marmots and eating tourists. While busy trying to digest one particularly tricky mountain climber, he discovered amongst his possessions something called a ‘MacBook Pro’. Fast forward 9 months, 6,000 YouTube tutorials and a duck later and we have his debut creation, The ‘High Grade’ EP!

Jayceeoh – Industry heavyweight JAYCEEOH, producer and world-renowned turntablist, has become one of the most revered and respected DJs in the United States today. In 2014, Jayceeoh hit the ground running by gathering early support from the likes of A-Trak, Bassnectar, Borgore, Flosstradmus and The Bloody Beetroots, to name just a few. His trap and bass-driven tunes have also captured the attention of some of the largest online platforms, including Billboard, DJ Mag, This Song Is Sick, Dancing Astronaut, Gotta Dance Dirty, THUMP, EDM Network, and Run The Trap, amongst others. Since Jayceeoh’s years competing in the DMC world championships, to bringing home the title of “Master of the Mix” on VH1 in 2013, this Los Angeles based producer and DJ has been relentless in his path to the top of the pyramid. Releasing music on Atlantic Records, Dim Mak, Fool’s Gold, Ultra Records, Buygore , and other heavy hitters, Jayceeoh continues to push the envelope forward with no signs of slowing down. To date, he has played some of the biggest venues and festivals around the world, including TomorrowWorld, EDC, iHeartRadio Festival, Firefly Festival, Lights All Night, Das Energi, Empire Music Festival, Sweetwater 420 Fest and many more. Outside of the festivals and his busy headlining tour schedule, Jayceeoh has also toured with Morgan Page, The Bloody Beetroots, Terravita, 2 Chainz, Pusha T, and Sammy Adams. In addition, he has also officially inked a 2016 monthly residency deal at The Light Nightclub, a top 5 venue in Las Vegas and one of the most premier nightclubs in the United States.