Filed Under: Other Tagged With: Havoc Thursdays, Protohype, Son Of Kick, The Yost Theater, Yost Thursdays 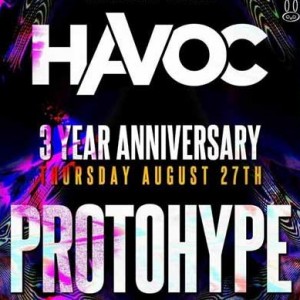 Protohype – Max Hype is Protohype. Originating in the hip hop world, 23 year old Protohype’s fusion with bass music has created a new genre, Dub Hop. Combining the gritty low end of dubstep with trunk rattling hip hop drums, a sound is born like nothing else. His progressive sound has lead him to new heights in both the bass music community and the hip hop world. His massive collection of free music floating through the interweb has gained him respect not only from other DJ’s, but from fans across the country. Be on the lookout for Protohype, coming to crush a city near you.

Son of Kick – Mika Abadie, known to the music world as Son of Kick, only meets one set of expectations – his own. Whether it be through his unpredictable and explosive productions, his ambitious, high octane live sets, or his provocative, critically acclaimed music videos, this West London-based Producer, DJ, vocalist and multi-instrumentalist shows his quality while forging to new paths to thrilling sonic frontiers. Son of Kick isn’t just another spacebar-happy party rocker, he’s a musical cosmonaut on a voyage of discovery. Fueled by a host of influences as varied as his sound and a passion and ambition that’s onlyBEGINNING to fire, Abadie’s goal is to write music that he will still be proud of in 5, 10, 20 years, not some microwaved banger that you forget after 10 seconds. Nothing’s safe, especially not speakers, or minds, but the best is in the future, where Son of Kick will find you.