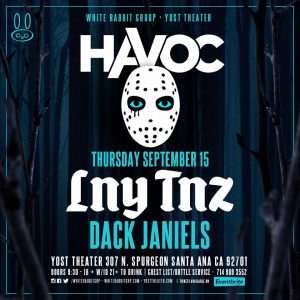 Lny Tnz  – Whether you don’t give a fvck about tomorrow, your trap is going techno, or you’re just a little paranoid, there’s a great reason to get fired up about LNY TNZ. Teaming up in their hometown, Vlaardingen, Mitchell Vreeswijk and Jan Stadhouders formed LNY TNZ with the shared passion of putting a new twist on hard hitting EDM. As they released their music online, they were quickly noticed in the Dutch music scene as a DJ tandem, known for their totally unique sound. Even then, they were trying to push the genre boundaries and gained support from other leading artists. In 2012, LNY TNZ recorded several underground bootlegs, and quietly returned to the scene. After re-establishing their studio in Rotterdam, it didn’t take long for fans to notice and welcomed the duo back from hiatus. LNY TNZ kicked off some hits in succession, and in collaboration with some of top artists in the space. They’ve recently toured around the world, stopping at festivals including Tomorrowland, EDC Vegas, Summerfestival and Defqon to name a few. LNY TNZ continuously pushes the boundaries of the EDM genre, famously embracing the term FVCK GENRES. Their music is proof of this, as they collaborate with rappers, vocalists, and DJs expand the sounds and reach of their music.

Dack Janiels – Dack Janiels is the alias of Tanner Chung, a Los Angeles based Dubstep producer whose name has been heard more and more frequently in the bass music scene. With international support, his tunes have been tearing up sound systems across the globe with his signature “Swamp Stomp” style. With a debut release on Bassacre Records coming in at #62 on the Beatport Top 100 Dubstep Releases, and forthcomings on IAMAudio and Brotown Records, Dack Janiels is setting out to melt the brains of every basshead in the universe.