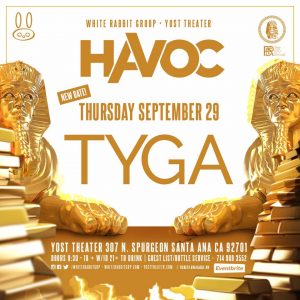 Tyga – Tyga (born Michael Stevenson) was just another kid from the hood struggling to rise above the negativity that surrounded him. Born and raised in the infamous Compton, CA armed with nothing but an amateur mixtape and hunger, he built solid local buzz through impressive live shows and an online hustle. Still, a kid with lofty dreams wondered if he’d ever catch that “big break”. Then one day a conversation at a popular LA sneaker store changed everything. In the aisle of Flight Club LA he and Travis McCoy from Gym Class Heroes had a debate that switched from ranking the greatest Jordans ever to the greatest rappers. “We started talking about music and I got enough courage to give him my little mixtape” Tyga says. “He was telling me all this stuff he was doing with his band and I thought he was just lying to seem cool. Then one day I saw him on MTV, then I started hitting him up on AIM non stop!” he says with a chuckle. “Next thing you know I’m on tour with him going all over the world. It was crazy.” Travis relates “I can see myself at his age whenever I watch him perform. It’s an innocence and a sense of urgency a lot of artists today lack and it’s an honor for me to welcome him to the inner circle”. Travis signed Tyga to his Bat Squad Records imprint. A bond had been made indeed. Tyga soon became an unofficial part of Gym Class Hero’s crew and his undeniable presence would be felt at various events, appearances and shows. People began to wonder “who is this kid?” His charismatic swagger gave off the aura of a star while he patiently waited for his real chance to shine. That moment came at the 2007 MTV Video Music Awards. The night before the show Tyga found out that he would be perform the “Arms Race” remix with Fall Out Boy alongside Travis and Lil Wayne. Unexpectedly thrust into such a huge arena, most young artists would crumble under the pressure. Instead, Tyga stepped up and traded vocal jabs on a stage full of pop-culture heavyweights in front of millions of viewers. The star had arrived. Thoroughly impressed by the youngster’s gusto, Tyga and Weezy became fast friends. Wayne remembers “At rehearsal I thought he was just a stand in, but when the cameras were rolling I realized he wasn’t playing around”. Soon, Tyga would find himself in the studio with the self-proclaimed “greatest rapper alive” laying down verses for an appearance on the most anticipated album in years – Lil Wayne’s The Carter 3. Another famous musician known for his ability to spot talent – Fall Out Boy bassist Pete Wentz also took notice. He was so excited he suggested his label Decaydance team up with Bat Squad on a release for Tyga. “Gym Class’ success has opened a lot of new doors for us, “ Pete says “Yeah, it’s different but I think it’d be pretty lame if I only put out stuff that I thought everybody loves or gets. To me this is the future.” The press has also taken notice with early mentions in Blender, AOL.com and MTV. VIBE magazine even declared him as one of the best undiscovered rappers in America. The fact that momentum has started rolling in Tyga’s favor has not been lost on the humble artist. “I truly am blessed to have such great people believing in me. I’m real lucky and I can’t wait to get out there and make everyone proud. I just gotta stay positive, keep my faith in God and I know things will turn out great”