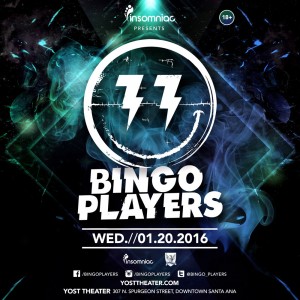 Bingo Players – Maarten met Paul through his younger brother in Enschede, Holland, a two-hour drive from Amsterdam. One day, he went over to hang out with Paul’s younger brother, and found that Paul was also making music using ProTracker software. “It was only four channels and was really basic, but it was a start and really fun to do.” “When we discovered we were both making similar sounding music with the same program we started spending all our time together and became friends right away’” said Maarten. Over the next decade they began recording; and in 2006 they began recording under the moniker, Bingo Players. Their tracks started to resonate with the EDM crowds in America and abroad. Their songs— featuring buzzing, bouncing synthesizers, crunchy, guitar-like riffs reminiscent of the Chemical Brothers, and powerful, driving beats— are shaped by a memorable lyrical hook or a melody. 2009’s “Devotion” utilizes the catchy vocal hook, and sets it against a funky infectious saxophone riff and syncopated backbeat.