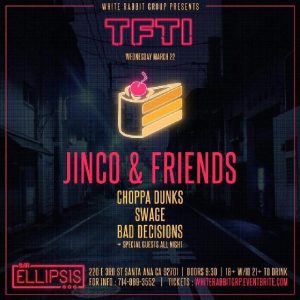 Choppa Dunks – Born in the small island country of Bermuda, Choppa Dunks has been involved in music since he was a toddler. After playing the drums in a successful reggae band for 4 years, Choppa decided to move to the US to bring his music career to the next level. Choppa attended Berklee College of Music in Boston for two years, which is where he decided to put drums on the back burner and bring his production to the next level. Since 2012, he has been recognized by the heavy hitters of his genre and had support from artists like Borgore, Major Lazer and many others. His first major release in early 2014 titled ‘Get Sore’ released on Buygore Records, reached the top 10 on the Beatport Hip-Hop charts, with many people in the bass music world rinsing it in their sets.

Swage – Dirtiest pirate around making the filthiest breaks in town…