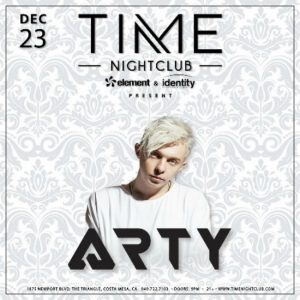 Arty is a Russian musician and DJ who succeeded in less than a year to make tremendous strides on the international dance scene. His music is supported by top musicians and DJs around the world, including Armin van Buuren, Paul van Dyk, Tiesto, Ferry Corsten, Above & Beyond and ATB. In 2009, Arty released his first production at the age of 19. His EP Vanilla Sky appeared on the label Enhanced Progressive and brought him to the attention of several DJs. His single “Bliss” appeared on tracklisting of A State of Trance with Armin van Buuren in early 2010. And his breakthrough came later that year when Above & Beyond signed him on their label Anjunabeats. They featured his singles Rush and The Wonder in their club sets and on their radio show Trance Around the World. In 2011 he released Zara, his third single on the Anjunabeats label. His tracks played on famous radio shows: A State of Trance, Club Life, Trance Around the World, Vonyc Sessions. “Vanilla Sky,” released in June 2009 on Enhanced Recordings, was awarded a 5 out of 5 rating for this EP track on the “Progressive Release of the Month”—a version of the renown DJ Mag. In 2010, Arty reached position 78 in the Top 100 DJs list in DJ Mag. At the 2011 International Dance Music Awards, he was nominated in the category Best Break-Through DJ, however, the award went to Afrojack. But Arty climbed 53 positions to 25 on the Top 100 DJs list that year. Also in 2011, Arty collaborated with Mat Zo, another trance artist signed to Anjunabeats. Their first joint production Rebound was released that year as the 200th single of Anjunabeats. The song was voted Webvote Winner on three straight occasions on the radio show Trance Around the World. At the anniversary party of Armin van Buuren’s radio show A State of Trance in April 2011 in Den Bosch, the two DJs played on the Main Floor with well-known DJs such as Markus Schulz, Above & Beyond, Gareth Emery, and Armin himself. Arty has had a monthly residency on the radio show Anjunabeats Worldwide since 2011, and that same year the compilation Anjunabeats Worldwide 03 that he co-produced with Daniel Kandi was released.