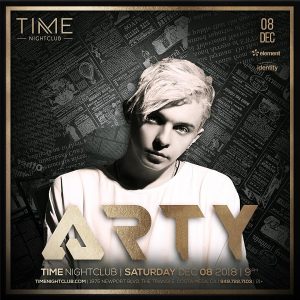 Finding that perfect sweet spot between house and trance, Arty’s formidable sound is one of dance music’s most recognizable and sought-after.
His DJ career began at the age of 21, with his first major gig coming 2011 alongside Armin Van Buuren as part of his A State Of Trance Episode 500 tour at the expansive Brabanthallen in Amsterdam. Since then, he’s played everywhere that’s anywhere – laying waste to the likes of EDC, Tomorrowland, Ushuaïa, XS Encore Las Vegas, Amnesia Ibiza and Creamfields to name just a few. He also mixed BBC Radio 1’s prestigious Essential Mix in 2012, commonly referred to as the world’s biggest mix show. Taking a more eclectic approach to his sound than some of his peers, his sets mix up house, trance, progressive and electro into one scintillating blend.
Arty’s ambition to cover new ground continues with the upcoming launch of his own channel on Twitch – the Amazon-owned live streaming platform for gamers – while his relaunched Together FM show will air on the US’ huge SIRIUS XM satellite radio network and Fun Radio in France. Expect more innovation to come, an increasingly diverse palette of sounds – and of course, a truckload more of his much-loved stadium-sized creations.