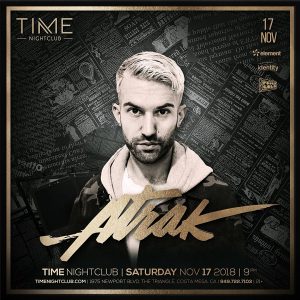 Very few DJs can jump from club sets to high-profile festival performances, to Kanye West’s larger-than-life stadium shows with ease. In today’s DJ culture, A-Trak holds a truly unique place. He founded 2007’s most buzzworthy label, Fool’s Gold, with a mission to merge all aspects of club music. The manifesto for this fusion was outlined on his first official mixtape: Dirty South Dance, which set the tone for Trizzy’s very own production, each acapella or track re-edited to create something fresh. In a matter of a few months, his signature remixes (for, amongst others, Boys Noize and Simian Mobile Disco) and his original tracks (Say Whoa produced for Nike and released on Kitsune) and a collaboration with Laidback Luke (Shake it down) were gaining support from the likes of Erol Alkan, Busy P, DJ AM, Annie Mac, MSTRKRFT and Boys Noize. This year A-trak has created two critically acclaimed pace setting DJ mixes for US dance music giants Thrive (Infinity +1) and UK stalwarts Fabric (Fabric Live 45) and is about to embark on recording his debut solo record.