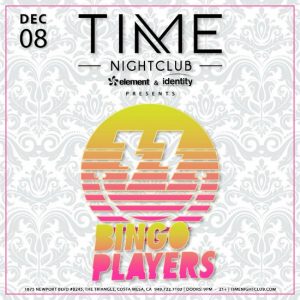 In between playing festivals and clubs around the world, the duo found the time to start their own label, Hysteria (a hat tip to Def Leppard, one of their favorite bands), releasing singles from Carl Tricks (“Mad Dash”), MAKJ (“Springen”), and Henry Fong (“Jump”) as well as Bingo Players tunes. In 2013, they scored one of their biggest coups. An updated version of their 2011 track, “Rattle,” titled, “Get Up” (Rattle),” with LA-based act, Far East Movement, rapping over a bouncy, catchy beat, became a instant hit. When they first played the tune back in 2011, Maarten and Paul didn’t know if audiences liked it, but then, the single started to pick up steam around the world and slowly continued to grow. It eventually charted in the Top Ten around the world including; Germany, Austria, France, and Australia (where it ended up going double Platinum), Gold in Canada, reaching the coveted #1 spot in the UK charts, and selling over 200,000 records in the U.S., reaching #5 on the dance charts. The success of the single, and the quirky, humorous video featuring ducks squaring off against hoodlums (which now has over 40 million views) helped propel Bingo Players high into the DJ Mag Top 100 list last year.