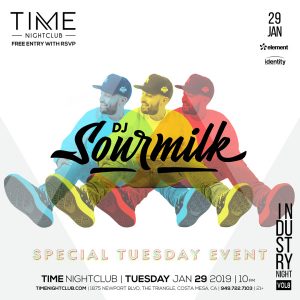 Having spun onto the scene in 2000, Cali native DJ sourMILK has already performed alongside some of the music industry’s heaviest hitters including Ozzy Osbourne, Kanye West, Jay-Z, Snoop Dogg, Rick Ross, and Red Hot Chili Peppers. His Discography boasts mixtapes hosted by hip hop legend Nas, and most recently, Chicago’s smooth rhyming rapper/actor, Common, who just celebrated the successful release of his ninth album. In his early days, the young sourMILK started making “mixtapes” by recording from tape deck- to tape deck. “Literally… I would hit record, record a snippet of something, pause it, then record something else,” laughs sourMILK. “My brother and parents got tired of seeing me do that and bought me a pair of turntables for my 15th bday.” From then on, sourMILK kept his fingertips to the vinyl, putting in the hard work that would quickly elevate him to where he stands today. Appreciated for his diverse taste in music, DJ sourMILK has been know to cleverly blend beats from across the musical spectrum. He treats no genre taboo when it comes to orchestrating his mix-music masterpieces.

When he’s not spinning at Hollywood hotspots like Apple, Kiss Lounge, and Green Door, he’s often blessing the airways for L.A.’s mega station, Power 106 fm, “Where Hop Hop Lives,” or nationwide Saturday nights on XM and Sirius Satellite radio. His works-in-progress include an album titled The Kush 2009, with Bay Area artist Ya Boy, as well as his very own new mixtape series called “someofmyfavoritethings”. DJ sourMILK is one artist who is most definitely past due.