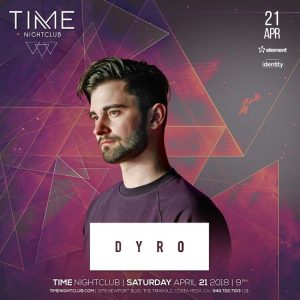 Meet Dyro. Energetic young-gun, remix maestro, house music magician. To those in the know, he’s one of Holland’s future megastars, the crown prince of the global electronic music scene. For those still waiting to discover this phenomenal young artist, be quick before he wins a breakthrough trophy.

Like a finely tuned Ferrari, Dyro’s career has accelerated with awe-inspiring speed. In 2011, aged just 19, he found that he had both the time and the focus to make the leap from music fan to music maker. A true perfectionist, he spent months honing his skills before finally gaining the confidence to put his work online. It wasn’t long before a series of lucky coincidences connected the tunes on his Soundcloud page with a true influencer and one of Dyro’s own personal heroes – Hardwell.

In December 2011 Dyro released his first EP on Hardwell’s label, Revealed Recordings. The impact was instantaneous, and soon his tunes were in the bags of a veritable hit parade of international DJ superstars. Afrojack, David Guetta, Tiësto, Sander van Doorn, Dada Life, Laidback Luke and of course Hardwell himself all came out in support of this talented young producer. Crowds worldwide were quickly introduced to tunes like Daftastic, Metaphor and Magno. The crowds responded admirably, going absolutely ballistic whenever his productions appeared.