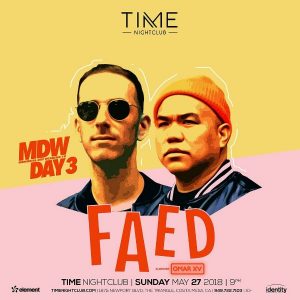 Fresh off their very first nationwide summer tour as FAED, DJ Five and Eric DLux are ready to maximize their musical momentum.

The SKAM Artist DJs and Sin City nightclub favorites—Five lives in Las Vegas full-time while DLux splits his time between Vegas and LA—are among the most ubiquitous names on the Strip, seemingly setting the party on fire every night in one club or another. They’ve been teaming up as FAED (“fade”) for two years now, expanding their individual brands while doubling the fun and energy in their combined sets. “We both have our own personalities, but when we get together it works itself out,” Five says. “Whatever we bring, they expect it twice over,” DLux adds.

Their individual sound-styles have been in high demand for years, but things have picked up even more lately. “There’s a lot of movement back to hip-hop in the past year and a half,” Five says. “The present-day [version] of open format contains EDM and trap and hip-hop and Top 40. It’s changed a little bit, but I think for the better.”

The tour took FAED to cities across the country, Atlanta to Charlotte to Miami to San Francisco. “It was successful because we got to hit those markets together, some of which we’ve played only individually for years,” DLux says.

Now that the tour’s done and their hectic schedules have become slightly less so, they’re focusing on another first—releasing a four- or five-track EP this spring with some big-name guest artists like Kid Ink. “We have a couple other artists we don’t want to jinx, but it’s legit,” DLux says. “It’s all about taking advantage of our days off to work on the bigger picture.”