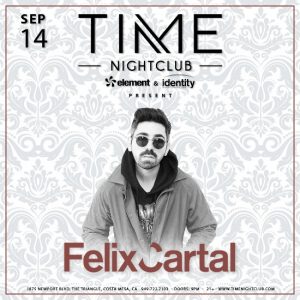 Associated with Dim Mak Records, Felix Cartal is a Canadian electro-house producer who creates buzzing, energetic dance tracks aimed squarely at the dancefloor, but he also has a soft, sentimental side, as evidenced by the many love-themed songs he’s recorded with female vocalists. Cartal fuses his punk roots with his love for club culture, enlisting guest vocalists from bands such as Death from Above 1979 and the Blood Brothers for his tracks. Hailing from Vancouver, British Columbia, Canada, he initially established himself with remixes of Moving Units’ “Crash ‘n’ Burn Victims” and Dragonette’s “Take It Like a Man” in 2007, not to mention unofficial remixes of MSTRKRFT, Britney Spears, Ashlee Simpson, and others that circulated in the music blogosphere. Steve Aoki signed Cartal to Dim Mak in 2009 and released his debut EP, Skeleton, in May of that year. Later that same year he was featured on the label sampler Dim Mak Dance Compilation, Vol. 1: Evolution. Cartal made his full-length album debut the following year with Popular Music. “Volcano,” featuring vocals by Johnny Whitney of the Blood Brothers, was released as a single. Meanwhile, Cartal increasingly established himself as a DJ, touring the North American club and festival scenes and releasing freely downloadable mixes on the Internet. Cartalcontinued to release a stream of singles and EPs, often featuring guest vocalists. Second album Different Facesappeared in 2012, including the single “Tonight,” featuring Maja Ivarsson of Swedish band the Sounds. Cartal began 2013 by releasing “The Alarm,” a collaboration with Autoerotique, and later released an EP called Past Present Felix, in addition to remixing tracks by Zedd and Bloody Beetroots. In 2014 he released the EP Credits, as well as another collaboration with Autoerotique, “Heat.” The singles “With You” (featuring Natalie Angiuli) and “Something to Live For” (featuring Nikki Yanofsky) saw release in 2015. In 2016, Cartal remixed songs by the likes of Selena Gomez, Kiiara, and Wafia, and collaborated with producer Kaskade and singer Ofelia K on a single called “Fakin It.” He also released “Keep Up” with vocalist Steph Jones, “Drifting Away” (another collaboration with Ofelia K), and the solo single “Falling Down.” The following year saw the release of “Get What You Give,” Cartal’s dance remake of the 1998 hit by New Radicals.