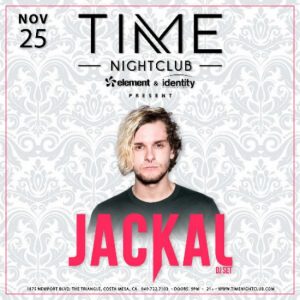 Jackal is a figure like no other in electronic music. He consistently refuses any boundaries given to him — whether they be the confines of the dreary English seaside town he grew up in or the barriers between musical genres. Considering his singular work ethic, it was only to be a matter of time before he broke through into popular consciousness, which he did in 2013 with “Shakedown”. The track was an immediate hit with its low BPM blend of heavy hip-hop bass and dancehall vocals, topped off with immaculate production. “Shakedown” was the start of a journey that lead to Jackal moving out to LA and releasing tracks on labels like Mad Decent, OWSLA and Buygore. Jackal, aka Mikey Pennington, creates his stunning floor-fillers out of his deep love for a wide range of musical genres. Alongside his clear influences from dubstep, hip-hop and electro-house sit everything from UK grime and garage to house and heavy metal. A typical Jackal show will make these genre distinctions seem redundant, fusing them all into his bass-driven sound. Jackal is currently riding high off the back of a huge 2016. Highlights of last year included: international tours (China, India, Australia); huge new singles (“Netflix N Kill”, “Anonymous” and “Ice”); a mix for “Diplo and Friends” and “Animal Style” appearing in Broad City. For 2017, Jackal is planning his biggest year yet. His upcoming EP, “Endorphins”, will take Jackal to yet greater heights. He aims his first cohesive project to present us with a fresh new direction while still giving us the artist we know and love. On top of this, he will be supporting the EP with a globetrotting world tour. The day of the Jackal is truly upon us.