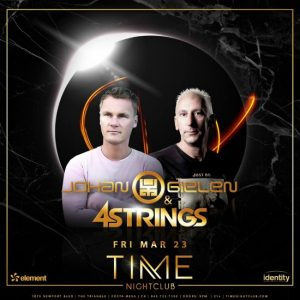 Johan harvests worldwide hit records and strikes gold with titles like “The Beauty of Silence” en “Twisted”. By that time the amount of remix assignments for artists like, amongst others, Tiësto, Boy George, The Thrillseekers, Chicane and Delirium, has gone through the roof. Countless Top10 positions follow, all with global success and especially in Germany, Austria, France, Switzerland, U.K. and his land of birth Belgium. Johan’s Productions receive support from all the major DJs and are played everywhere.

In 2006 Johan launched his debut album “Revelations”, which is released by Black Hole Recordings. With this release he brings his fans not just trance, but also progressive and techno. From that moment on it is clear for everybody that Johan Gielen can no longer be seen as merely a Trance DJ, but also as an artist who knows how to make the perfect combination of house, electro and trance in a style that he obviously adapts to his audience..

Enter 2009 and Johan tirelessly continues the up going line in his career. He mixed the very first edition of the “Private Party” mix compilation for Black Hole; under the alias of Airscape he released the single “My Love” with the vocals of Jes Brieden and he began a brand new project with Virtual Vault, named The Dubguru. Their first single “U Got To Know” immediately shot to the highest regions of the charts The productions show that over the years Johan has widened his view and that he doesn’t limit himself to trance, embracing other styles as well.

Online Johan is also a busy man and hosts his own monthly radio show and podcast, called “Global Sessions”. The show is broadcast by various stations all over the world. And it’s exactly this global character that defines Johan Gielen’s career. Indeed The Netherlands is his home base, but the world is definitely his working place. Or, as Johan likes to put it: “The world in which I move around every single day, can be read by the stamps that I have all over my passport. With such an enormous amount of airmiles I can fly around the world for free six time over!” (Laughs).

2012 Johan Gielen has started a collaboration together with Jan Vervloet, one of the best producers Belgium has to offer, with an enormous list of hits already under his belt. This collaboration has spawned an very special track,built around an old, well known, sample the double J’s created a dirty sounding big room banger ‘Music for Free’ and as Follow up ‘Break ya Down’. ‘Music For Free’ was found in the Beatport top 100, Trackitdown top 3 & the Dancetunes Charts. And as if it isn’t enough yet, Johan currently works hard for the release of his upcoming artist album and Airscape album, featuring several collaborations with befriended class-A artists.

Up till today from all over the world the booking requests pour in and in no time he plays the biggest venues of the world, features on the known raves and appears in every line-up of the ruling festivals and clubs like Dance Valley, Tomorrowland, Nature One, Sensation White, Sunrise Festival, The Government, Space, Godskitchen, Sunrise festival and remains the only artist who performed 15 times in succession at the prestigious Trance Energy.

Behind the name 4 Strings hides 2 musicians, Carlo Resoort and Jan de Vos. The two have known each other since 1986. In 1990 they became interested in dance music and from that moment on, they started producing their own music. All their spare time was spent in the studio. Throughout the next couple of years not only did their skills expand but also the amount of equipment in their studio. With the new tools and experience that they had, they could finally discover in which direction they wanted to go with their musical careers: Carlo decided to stay in the studio while Jan found his passion in mixing and started his DJ-ing career.

Jan met up with Piet Bervoets (Carlos, ROOS and Rank 1). Piet taught him the basics of mixing. After a couple of months, Jan joined a drive-in-show, where he played all kinds of music from R&B, Top 40 to Happy Hardcore. His skills were improving rapidly, and it was during this time period he noticed that his main interest was in dance music. After winning a first place prize in a DJ contest, he was offered his very own residency.

Carlo Resoort started with dance music in 1994, and soon after that he had his first release. After a couple of releases he had his first major breakthrough: “Carlos – the silmarilla”, produced together with Piet Bervoets of Rank 1. Two years later he had another hit with “Turn it around”. Around this same time, a new record company was born, “Spinnin Records”. Shortly thereafter Carlo signed his first record deal and 4 Strings was born.

“Daytime” was the first track of 4 Strings, supported by Paul van Dyk, Judge Jules and Tiesto. The follow up was “Into the night”, which got even more support. After a vocal edit called “Take me away” it became a huge hit around the globe, even now the track can be heard worldwide. “Diving” and “Let it rain” were the follow ups, and soon the first album was released. After remixing “Summer Sun” they started to work on their second album “Turn it around”. The album was named after the new single which is a remake from Carlo’s former project “Alena”. Carlo also started another project under his own name, with productions like “Remover”, “O” class”, “Musica”, “Ayers Rock” and “Rise”. In 2005, 4 Strings released another hit “Sunrise”, this track was the theme of the number one dance music festival in Poland also called Sunrise.

DJ 4 Strings is not just your average DJ, he is an entertainer. He is part of the new generation of DJ’s today. Crowds are amazed by his refreshing and unique style of playing music. DJ 4 Strings is always prepared with unpredictable and quality tracks that both excite existing fans and bring new people to the scene. There is so much good music out there and 4 Strings do not want to limit themselves to one style. 4 Strings is also in the top 10 for Holland on “The DJ List”.

4 Strings touring diary is incredibly hectic for 2006, with regular stops at major venues in the world. Such as touring the USA, Australia, Mexico, Poland, Asia and Holland just to name a few. 2006 is sure to be a massive year with the release of their brand new track “Hurricane” and also playing at the leading trance party of Holland “Trance Energy” in February. Summer 2006 will also see the first ever unique “4 Strings Live Tour” worldwide. Following the release of their new album this year.