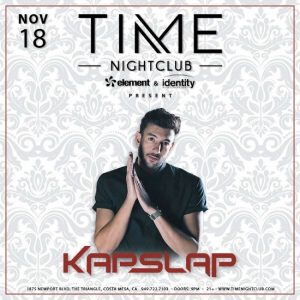 Jared is currently in his 4th year of the Honors Integrated Business and Engineering 5 year program at Lehigh University in Pennsylvania, where he finds time on the weekends to tour the country and produce. He began experimenting with Garageband in late 2009 and released his first “mashup” using Ableton Live 8 in the summer of 2010. Less than a year later he played his first gig, leading to an impressive 25 show tour in a short 9 months to close out 2011. Now travelling every weekend, he’s taking the country by storm. Keep an eye out; you definitely don’t want to miss your chance to rage with Kap Slap! Initially started as a hobby to provide an outlet for his creativity at College, his mashups and bootlegs are now internationally recognized as some of the best in the game. But these can only get him so far. The next chapter involves producing his own original tracks. Unfortunately his lack of time and perfectionist nature have thus far prevented him from doing so but he plans to take the summer of 2012 off from work and school so that he can finally pursue his dream. The stage name “Kap Slap” refers to his family line shot in the Kappa Alpha Society; immediately after the recipient begins funneling a beer a shot of Bacardi 151 rum is added, giving them a “slap” in the face.