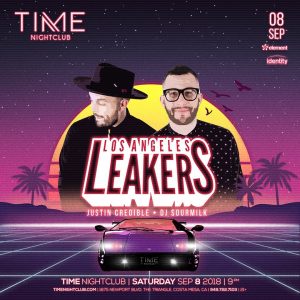 Around LA and Vegas, LA Leakers’ name is synonymous with party beats and crowd thrilling bass lines. Justin and Sourmilk, both as individual artists and as a duo, have residencies at some of the hottest nightclubs in Las Vegas, including Drai’s, Tao, Hakkasan and Omnia, and in LA at Playhouse and Supperclub. You can catch the guys regularly performing alongside some of the music industry’s heaviest hitters, including Snoop Dogg, Chris Brown, Kanye West, Jay-Z and the Red Hot Chili Peppers. They’ve also recently broken into the festival world, with performances at HARD Summer 2015 and HARD Day of the Dead on Halloween weekend of 2015. But they aren’t stopping yet. The Leakers are continuously producing new music, including their most recent singles, “Pull Up” featuring Kid Ink, Sage the Gemini and Iamsu, and “Ball Like This” with Future, Kid Ink and Wiz Khalifa. Due out in 2016, Justin and Sourmilk are working on their first full-length album that will be chopped full of eclectic blending of musical styles and diverse sounds. Keep an eye on these guys, because the LA Leakers are only getting bigger and better.