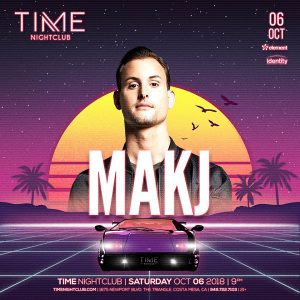 Mackenzie Johnson, better known as MAKJ, uncovered a passion for mixing and DJ’ing at only 15 years of age. While living overseas in China as a professional racecar driver, the teenager grabbed hold of his first set of Technics 1200 Turntables. As he experimented with the new equipment, Johnson also took advantage of his foreign exposure and critically studied the technical nuances and styles set before him in the most popular overseas clubs. No longer would DJ’ing bejust a newfound passion for MAKJ; it soon turned into a thriving career path. Honing and perfecting his skills over the past several years, MAKJ has DJ’ed at some of the premier venues in country including Playhouse, Avalon, Dim Mak Studios, and Supperclub in Hollywood, Marquee, TAO, and Tryst in Las Vegas, The Grand in San Francisco, and Lavo in New York. He also performed on last summer’s IDentity Festival in Boston, Washington, and New York, and has played direct support to greats such as Avicii, Armin Van Burren, Steve Aoki, and Wolfgang Gartner.