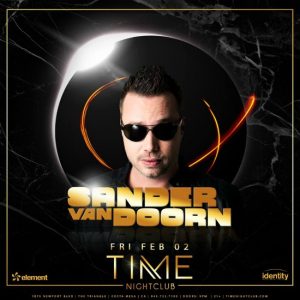 Having made his debut in the world renowned DJ Mag Top 100 at #32 in 2006, before climbing 19 places to #13 in 2008’s poll. Sandwiched between Carl Cox and Paul Oakenfold, the fast rise of Sander van Doorn is a testament to his talent. From the start Sander (and his alter egos: Sam Sharp, Purple Haze, Filterfunk & Sandler) has produced a variety of sounds, combining elements of trance, electro, techno and house. The first big achievement in his career was securing residencies at Judgment Sunday in Ibiza and at the Gallery in London. He gained recognition from the likes of Carl Cox, Armin van Buuren, and Tiesto, And Carl wasn’t the only Sander fan, so he seized the opportunities at hand and dedicated himself to a relentless touring and production schedule for the next few years. It was during this time that Sander penned some of his classics. From originals like Grasshopper, Punk’d and Riff, to massive remixes of The Killers (Spaceman), Sia (The Girl You Lost to Cocaine), Robbie Williams (Close My Eyes) and Depeche Mode (Peace), it seemed the lad from Eindhoven was on a collision course for superstardom. His debut artist album Supernaturalistic was released in 2008 to rave reviews and launched a 32 date global album tour. He followed this by winning the coveted prize of Best Breakthrough Artist at WMC’s IDMA, where he also received a nomination for Best Underground Track with “Riff.” That same year he won Best Breakthrough DJ in the International Dance Music Awards at the Miami Winter Music Conference. Every year sees Sander playing to more than one million clubbers. He consistently headlines huge events from Sensation to Global Gathering, from Trance Energy and Mysteryland through to his high profile summer residency at Cream in Ibiza. In August 2010, Sander released his double CD compilation Dusk Till Doorn with a big launch party at the Avalon nightclub in Las Vegas, where Sander played an extended five hour set. Sander continued to bring his Dusk Till Doorn show to many nightclubs around the world and the list keeps on growing. In August 2012 it was announced that Sander van Doorn and various notable electronic music producers would be featured on the Halo 4 remix album.