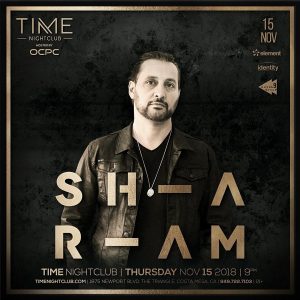 The Grammy-winning producer continuously reimagines his sound and style, which are rooted in his belief that forward motion is only possible through cross-pollination of styles and influences.

Sharam has never been afraid to push the boundaries to their limits, and as DJ Mag put it, “you could never accuse Sharam of re-peating the same trick over and over.” As such, the expansive and prolific artist has released two new albums in the past 2 years. ‘Retroactive’ saw him connecting with all of his musical influences from a storied 20 plus-year career, while his 2017 album ‘Collecti’ forged Sharam’s return to his techno roots with over eighty minutes of blistering and dark original tracks mixed methodically like a compilation album – a feat rarely seen in dance music. It’s nothing new for Sharam, who pioneered the ‘album-as-mix-compilation’ with his debut solo album Get Wild in 2009.

His eclectic DJ sets are a journey through sound, with razor-sharp focus to quality and obsessive attention to entertaining both purists and the unassuming. When he’s not on the road or in the studio, Sharam is helming his record label Yoshitoshi, proving that after 20 years the classic label is a force for the ages. In 2017, Sharam launched the weekly mix show Yoshitoshi Radio, which features mix-es recorded both live on the road and in-studio and guest mixes from Yoshitoshi artists. The program is now syndicated on stations worldwide.