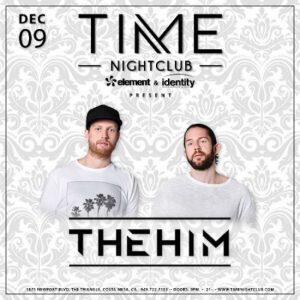 The Him at Time Nightclub // Tickets & Guestlist

The Him is a music production duo hailing from Amsterdam and creating buzz with their smash hit singles and remixes. Inspired by artists like Daft Punk, Duke Dumont, Empire of the Sun and The Chemical Brothers, The Him’s sound is a crossover between indie, deep house, nu disco and pop – full of fresh, experimental sounds bound to make you move and wanting more. Their latest single “Drive You Home”, a collaboration with Sam Feldt, was released through Spinnin Records/Polydor to rave reviews. In addition, the guys have also dropped official remixes for the likes of The ChainSmokers, Adrian Lux, Solomon Grey, and Dotan; garnering global attention on various charts – including two top 10s on Beatport. With close to 50,000 followers on SoundCloud and millions of plays, The Him is also supported and played by the some of the world’s biggest DJs including: Tiësto, Martin Garrix, Oliver Heldens, Pete Tong, and more. Their Midnight Mixtapes on SoundCloud featuring the latest deep house tracks – and including their own – is still growing, reaching tens of thousands of fans around the globe every month.