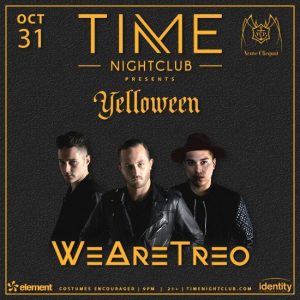 Surfers by Day, DJ’s by night – the entrance of the phenom DJ group WeAreTreo (We Are Tree-oh) onto the music scene in 2013 started with their love for the ocean and all things surf travel, mixed with the late night club scene that went along with it. Growing up in the tight knit community of action sports and surrounded by art, culture, and some of the most covetable brands in surf/fashion lifestyle, allowed them to meet, form, and converge a unique group and sound derived from the eclectic industries and musical backgrounds they were individually influenced by at an early age. Their mission to collaborate and collide with the subculture they participate in has been turning heads all the way around. Making heads spin has come naturally to the three as they don’t aim at controlling the crowd at their shows like the other DJ’s, but more at unleashing the crowd alongside with them. With a love for all types of music, the Southern California locals WeAreTreo comprised of Ace Future, Trevor Shawn, and John Faux have become a stand-out DJ / Producer collective rooted in curating good times. With residencies at world renowned night clubs such as Hakkasan, Jewel, and Wet Republic in Las Vegas, as well as Omnia San Diego, and E11even Miami, they are quickly taking over the nightlife party scene. They have recently released hits such as Break Me Down, their remix of Twenty One Pilots “Ride” and their latest summertime smash single “Hypnotized”. With upcoming dates across the US, and Asia this year they have definitely become the ones to watch.