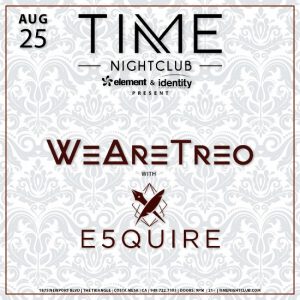 Surfers by Day, DJ’s by night – the entrance of the phenom DJ group WeAreTreo (We Are Tree-oh) onto the music scene in 2013 started with their love for the ocean and all things surf travel, mixed with the late night club scene that went along with it. Growing up in the tight knit community of action sports and surrounded by art, culture, and some of the most covetable brands in surf/fashion lifestyle, allowed them to meet, form, and converge a unique group and sound derived from the eclectic industries and musical backgrounds they were individually influenced by at an early age. Their mission to collaborate and collide with the subculture they participate in has been turning heads all the way around. Making heads spin has come naturally to the three as they don’t aim at controlling the crowd at their shows like the other DJ’s, but more at unleashing the crowd alongside with them. With a love for all types of music, the Southern California locals WeAreTreo comprised of Ace Future, Trevor Shawn, and John Faux have become a stand-out DJ / Producer collective rooted in curating good times.

E5QUIRE, a Los Angeles based Producer and DJ, is recognized for his high energy and unique ability to musically command a room. A precocious entertainer, his early curiosity for music production encouraged him to enter the industry as a DJ at a very young age, where he discovered an aptitude for both entertainment and building client relationships. In combination with his natural sense of business acumen, E5QUIRE rapidly gained notoriety for his talents playing massive hip-hop sets and contemporary genres, and his vibrant energy has landed him a unique niche as one of the most successful and engaging mc’s in the country. Motivated by his seamless transition into the competitive nightlife industry, E5QUIRE capitalized on his success as a DJ by pursuing a career in Law, in which he merged his passion for music production with the management of several high-profile athletes and artists across the country. Thriving on challenging and expanding his musical and intellectual abilities, E5QUIRE has mastered the realm of composition, releasing a number of remixes and original productions across an array of genres.