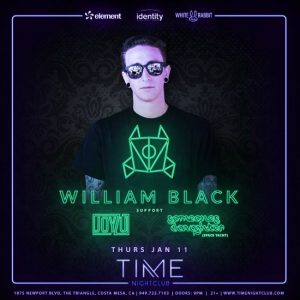 William Black was born and raised in Orange County. His father, an accomplished and exceptional guitar player, showed Will his first love of music. Will was first exposed to dance music by his sister when he was 13 and immediately fell in love with its rhythm and feeling. He went to his first rave at 16 and instantly knew he had to become a producer. Following this he enrolled in Icon Collective in Los Angeles to learn the art of creating electronic music and live performance. William graduated in 2014 and became a Los Angeles native. Since releasing his first remix 2 years ago he has gained support from artists including Gareth Emery, Adventure Club, NGHTMRE and Slander. William Black’s remix of Evangeline’s “My Kingdom” charted on Spotify gaining over three million plays on Spotify in only months. Following this William toured with his friends Illenium and Said the Sky to sold out crowds all over the country. William wants more than anything for his music to be an emotional escape for people, just as it has been for him. Whether a way to celebrate success or find comfort in the hard times, his music is real and meaningful. His live sets demonstrate the highs and lows of dance music taking people on an intrinsic journey to find happiness through reflection. William works every day to transform nostalgia into sound