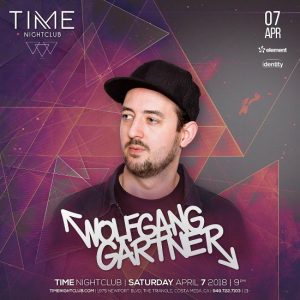 “I have to make something that’s never been made before; have to make the best thing that I’ve ever done in my life – otherwise it gets stagnant or worse,” says producer/DJ Wolfgang Gartner. Whether or not his progressively more maximilist take on electro-house is your bag or not, you have to respect his exponentially steep rise through the electro-house ranks. And Lord knows, you’ve heard it — or about it: flipping Beethoven’s 5th for the 4 am crowd; eight #1 tracks on Beatport; remix/collabs with Britney Spears, Timbaland and Black Eyed Peas; festival-highlight performances at Coachella ‘10 and Electric Daisy Carnival’s ‘10 and ‘11.

“One of my mantras is that I have a responsibility to advance the genre. If I’m capable of doing something I’ve never done before, I feel like I have to use that ability, because there are not many people who do – or can. I have to push myself real real hard to do it. That’s something that’s really surfaced with this record,” he admits. Gartner’s work ethic is mythical amongst even his most storied contemporaries: Make music all week. Play it out all weekend. His DJ sets – and this speaks to a combination of prolificness, personal taste and a proven track record – are almost entirely made up of edits of his own work. Then again, when you spend 20 hours a day working on music…

“Maybe it’s like an insecurity and not being satisfied listening to it over and over, but I’m constantly asking myself ‘Could it be better?’ It could take me three hours to add this little milisecond sound that nobody but me will ever know is there, but I do it,” Gartner says of his somehow self-effacing self-confidence. “I get into tweaker mode; I’m just sitting there tweaking for ten hours straight on this sound or that track and putting everything together and coming up with something else.”