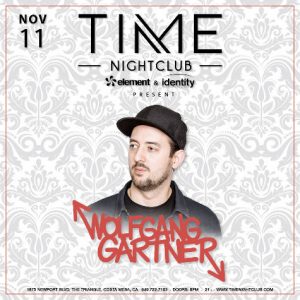 Wolfgang Gartner (real name Joey Youngman) is a Grammy-nominated American electro house producer and DJ. His music has been compared to the likes of Deadmau5 and Justice. Much of his music prior to 2010 was released through his own record label – Kindergarten, but in 2010 he signed with Ultra Records. In his short time producing music, a total of eight of Gartner’s songs have held the #1 position on the Beatport Top 10 Chart. Gartner has performed at world-renowned dance music festivals such as Coachella 2010, Electric Daisy Carnival 2010, and tours extensively around the world. Joey Youngman created the Wolfgang Gartner name in late 2007 after establishing a moderately successful name as a Deep House DJ. Not wanting to be criticized for such an abrupt change in style, Youngman created the name anonymously. Gartner’s identity was revealed officially in July 2008. In 2010, Gartner debuted as a featured guest on BBC Radio 1’s Essential Mix series, hosted by DJ/producer Pete Tong. In January 2011, Gartner announced a new video for the single “Illmerica.” In addition, the DJ announced a new logo created by famed New York graffiti artist Eric Haze. That same month, Gartner was nominated for four International Dance Music Awards, including Best Electro/Tech House Track, Best Progressive Track, Best Breakthrough DJ and Best Breakthrough Artist. “Forever,” a new collaboration with will.i.am, has been announced as the next single to be released in spring 2011.